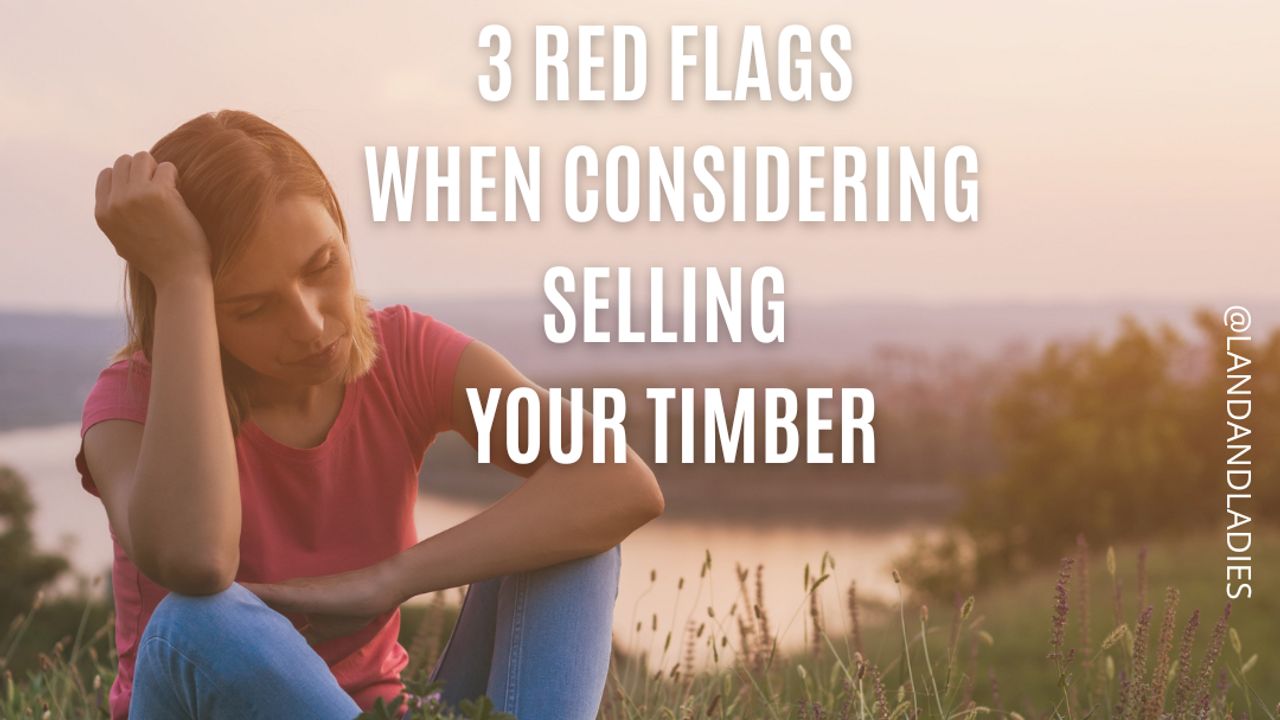 You’ve probably heard the stories….
You’ve probably seen me talk about it on social media over and over… and over again.
But this is topic is so important, I believe it warrants another discussion!
DO NOT SELL YOUR TIMBER WITH EMOTIONS. That was a little blunt I know, so let me explain myself. The forestry profession is full of amazing hardworking individuals. They are ethical men (and women!) who care deeply about their work, the land and of course you. The entire industry has so many moving pieces, many of which are completely out of our control, it’s honestly a business miracle! (But that’s another article for another day…)

But… (there’s always a but!)It’s the 1% that always gives everyone a bad name. The ONE bad apple that makes you have to be on your toes, to no longer trust handshake deals, and go into a situation with eyes wide open. So that’s what this is about: tips to watch out for when considering selling your timber so you don’t get taken advantage of! Now, before I get into your 3 red flags to watch for when selling your timber, or being approached to sell your timber, I will say each of these of themselves do not indicate someone is trying to take advantage of you. And I will explain that a little more at the end too… You are MOST LIKELY to be taken advantage of during times of emotions: most likely during times of inheritance through death in the family.

So, the FIRST red flag is this: being approach very shortly after a death of the family in which you have inherited the property.
You are at your most vulnerable during these times because you’re likely grieving the loss of a
loved one, dealing with probate for the estate and likely have never been involved with the
management of the land... maybe there were some financial costs that have occurred you are trying to figure out now that you are the primary decision maker for all things on the estate. In these emotional times, someone offering you cash up-front for your timber (or even worse, your entire land) may seem like an answered prayer: money AND you don’t have to worry about the hassle or liability with the land?! It is also because of the overwhelming stress, anxiety and grieving emotions you are more susceptible to welcome an easy deal that “seemingly” provides you a leg up financially. These approaches may come as a letter in the mail of “interested in selling your timber”, or a phone call or even an email! Is it a bad deal? I honestly can't say… maybe it truly is a coincidence… maybe they truly are in the county looking for some high land… maybe they are offering you the right and fair price… but in the lens of emotions, you are less likely to shop around and determine if they’re the right fit for you, and with that I say to just be weary and ALWAYS sleep on it.

*Disclaimer: mailed advertisements ARE a common way for consultants and loggers to notify forest
landowners in a county (or tri-county) area of their presence, and therefore this isn’t a stand-alone red
flag*

Red flag number 2: a short deadline for decisions.
Someone who doesn’t allow you time to sleep on it or to call for second opinions is possibly
trying to get a quick profit…for them. Typically, this will be in combination with red flag #1, but honestly can happen at any time too. NEVER get pressured into making a decision on the spot. You’ve spent 15, 20, 30+ years GROWING your asset… don’t spend 30 minutes selling it to the first person with money on the table. Maybe it’s simply because I don’t like getting pressured into a decision, but this one ALWAYS puts my hairs on high alert as well. There ARE SOME instances where quick decisions are needed, but the market is rarely changing on a dime or through the weekend (I promise). The instances in which you might need to make quick decisions are often if you have high dry land and would like to capitalize on high stumpage during wet weather OR if you have the opposite and have very wet ground that needs to be only logged in the driest of times… I both of these instances though I would always say sleep on it IF THIS IS THE FIRST TIME BEING APPROACHED. Ideally, you’d have built a conversation and relationship with a forester you could trust when he informs you “hey, we should put it on the market now.” Because even then, it likely is still going to take time: your forester will likely want your boundaries flagged/marked; maybe put out a bid which could take 2-4 weeks: maybe he’s just letting folks know about the opportunity to be aware of it and then formally putting the “for sale” sign up when the time is right. There’s a lot of ways you can “pull the trigger” on a "Quick sale”, but it should only be done with a forester you trust. Someone coming out of the woodwork, offering you a quick price with the promise to start operations tomorrow, you might need to say thank you very much for your time and send them on their way. Because remember, trees aren’t like investing in single stocks… in good times and in bad… price changes take time, and you are perfectly reasonable to want time to make your decision.

And the third red flag: a pressured focus on a high-value price point.
This of course is only relevant for per-ton (also known as pay-as-cut) sales. If you are offered a
lump-sum (meaning a one-time payment in full price) this flag won’t be pertinent to you but I would ask you to take extra care and attention to flags #1 and #2. So pressured focus… what does that mean? Because honestly everyone will be excited about high-value products, I mean why wouldn’t they be?! And your high-value product most likely is going to be your pole product classes… and if you have poles you can get some amazing stumpage rates from them! But the key word here is IF. IF you have them. If you don’t, then it doesn’t matter what the going stumpage is for poles, you’ll never receive a dime of it. And that’s where the pressured focus comes in to make your ears perk…. If someone is solely focused on “What you could get HERE… with THE POLES…” emphasizing that you may not be getting a lot of the low-value products like pulp wood, but you’re “clearly making up the profits with your pole values” … that is what I mean by pressured focus. They want you to agree to receive pennies on the dollar for your lowest valued wood, (because it’s just pulp right?) and let you dream of making it rain cash from your poles!

But the thing is… they KNOW you don’t have any pole products… the majority of your timber is actually pulpwood (maybe because it’s young or it’s poor genetic quality or maybe it hasn’t been actively managed and stagnated its growth) but they know you aren’t likely aware of that, because hey a 25+ year old tree HAS to clearly grown to be of substantial value by now, right?! And so, when the time comes to harvest your wood… and the pulpwood is leaving your land truckload after truckload and you’re left with the scraps of stumpage cash because of a poor deal which you got taken advantage of from your lack of knowledge. It should be noted too that if you signed a contract and got taken advantage of, there’s nothing that can be done as it’s not considered timber theft (although highly unethical from us professionals’ point-of-view) for you making a poor business deal.
*Disclaimer: this is different than what is sometimes referred to as “blended” prices where all the
products are averaged together to offer you ONE per-ton rate rather than sorting each product out and paying you per product. This isn’t a red flag, just simply another selling tool and often can be seen on stands that have a WIDE variety of products (a wide variety of size and quality of trees.) *

A Bonus red flag: someone not willing to sign a contract!
Get a contract. Get a contract. Get a contract! Seriously… do I need to say it again? “But he
promised he’d get me one after he returned the office!” And then the next day he left it in his truck, and the next day he thought he emailed it to you already, and the next week he has been meaning to get it to you but he’s been so busy, and the following week he’s finished his logging job (his version of finished) and now has stopped answering your calls and his checks are now bouncing. Okay, that might have sounded extreme, but I’ve heard the stories before. In many states there are timber-theft laws, but without a contract it then becomes a “he-said-she- said” argument that is very difficult to prove and ended up costing you more money in legal fees with no outcome on your side. DO NOT LET THEM START OPERATIONS WITHOUT A CONTRACT. This will save you heartache I promise you! Either from miscommunications, misunderstandings, from getting taken advantage of financially (from them NOT paying you that is), from them finishing operations as agreed upon (if they have to leave the site without cutting all the trees as anticipated), as well as a contractual agreement to fix any damages done to roads, fences or sensitive areas (again, if they leave the site due to weather perhaps and need to rehab the roads from log-truck rutting perhaps.)

Remember, someone trying to take advantage of you will likely be very charismatic, with a silver tongue and make you feel comfortable. They won’t make you feel uncomfortable initially. However, with some informative questions or comments you might be able to make them show their truly colors. Diving into contractual agreement terms and asking for time to find second opinions may fluster them to pressure you to make a decision on the spot. Remember: ethical forestry professionals are willing for you to take time, to answer your questions and work with you to meet your objectives.

Don’t let the emotions of your current situation fog your vision and decision making to accept a bad deal. Your trees are an incredible asset worth your patience and time.

Looking for a consultant to work with? Check out the 5 questions to interview a consultant forester
article to help you find the best fit for you!

Fill out the form below and receive our Beginner Landowner Bundle for FREE! All the fundamentals in one place to get you started.

We will never sell or solicit your information to third parties. Unsubscribe at any time. Danielle is a registered forester in Georgia on a mission to educate and empower women landowners. She graduated from the University of Georgia Warnell School of Forestry & Natural Resources with her BSFR in wildlife sciences in 2012 and Master of Forest Resources in 2013. 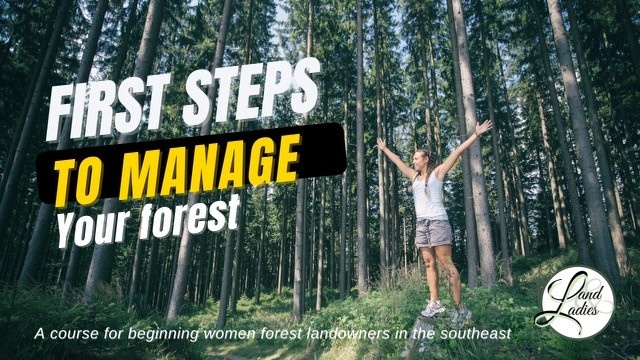 Valued at $149, this series of course modules offer insight on all the beginner landowner topics like land objectives, planning, record keeping, and ways to make your land profitable. Get ALL of this TODAY for FREE!

Summer 2022 dates will be announced soon! Fill out the form below to be the FIRST to know when registration is open.